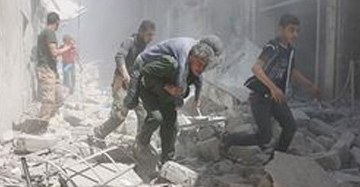 Spiraling violence in and around the northern Syrian city of Aleppo has plunged the country back into a multi-sided war and frayed the international effort to fight Islamic State, even as the U.S. and Russia try to resurrect a short-lived cease-fire.

“What’s happening in Aleppo is a massacre,” said Bebars Meshaal, head of the Aleppo branch of a rescue group known as the White Helmets. “The city is being set ablaze.”