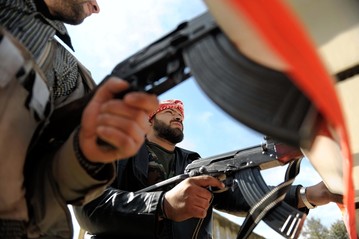 RABIAH, Iraq—Many Iraqis in the tribal region that runs through this border town share family ties, tribal bonds and sympathies with opposition fighters just over the border in Syria. But their leaders worry that an expanding cross-border arms trade here is re-energizing a radical group they say they have only just brought under relative control—al Qaeda in Iraq.